Data-driven insights from Internet of Things (IoT) devices are enabling energy and sustainability experts to make better-informed decisions like never before. Energy use within buildings is inherently variable, and until recently, even the brightest minds were in the dark when it came to explaining fluctuations in usage, due to the long list of factors that can cause a building’s energy usage to change seemingly at random. Having a fundamental understanding of how a building uses energy and what causes it to change is essential to optimising performance in the long term.

IoT devices are essentially any device or sensors connected to the internet, capable of providing real-time data and/or controlling other enabled devices through machine-to-machine interaction. In the context of a building, this can be anything from a sensor measuring the concentration of CO2 in the air, to a meeting room booking application that you can use to track occupancy. When data is shared between devices and platforms, it becomes infinitely more valuable.

The rise of the smart meter

A decade or two ago, energy data analysis was a very different story. Energy managers relied on manually read meter readings that were regularly taken every month, if they were lucky. Anybody who has worked with manual meter readings will fully understand the challenges; as a result, the data quality suffers immensely. Putting data quality aside for a second, the resolution of the data has even more detrimental implications. Attempting to understand building performance through a single kWh value each month is like driving a car and only measuring your speed once a day. It is just simply not enough information to make informed decisions. 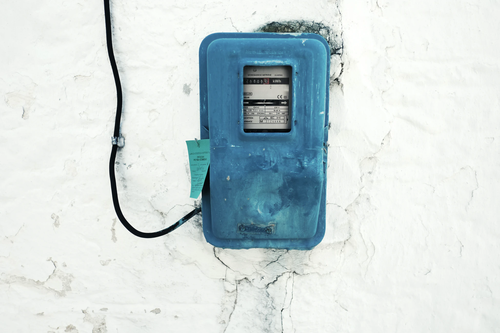 The introduction of automatically read meters changed the game. AMR meters, or smart meters as we know them (although the technology differs slightly the output is the same), provide energy and sustainability managers with a reliable stream of data at half-hourly intervals. The improved resolution completely changes how the analysis is carried out, by allowing analysts to dig deeper into the day-to-day operations of a building. It flags open business in the morning by a sharp rise in electricity usage, or by the heating being timed to come on just a few hours earlier by a spike in gas consumption. Fluctuations in the operational load are recorded when cooling demand peaks during the summer, as air-conditioning ramps up, or even early finishes on Friday are highlighted as employees shut down their PCs and switch the lights off to go for a beer to celebrate the end of the week.

Energy managers now had their ‘What?’ when a monthly utility bill increased by 20% year on year; they could explain that overnight consumption had increased during the 3rd week, or that consumption on Saturdays had doubled for the entire month. This was a revelation, but there was still something missing, the ‘Why?’

Energy data alone will not tell you why your usage has increased- it just tells you that it has. In order to find the ‘Why?’, explanatory data sets must be introduced in order to contextualise your energy data. The most utilised source of explanatory data used in energy management is degree-day data that is based on outside air temperature, and provides an indication of how much heating or cooling is required on a given day. It enables you to conclude that consumption increased by 20% because the heating demand was higher than expected during the month. Alternatively, to go a step further, analysts can create models based on linear regression analysis to predict the expected impact that changes in weather conditions will have on energy consumption, and determine whether the 20% increase is reasonable considering historical performance. This is a good start, but things get more complicated and less predictable once you are working with large multipurpose buildings and introduce human factors. There are four key areas where IoT devices can help you shine a light on the goings-on inside a building that will cause energy consumption to fluctuate.

Physical Equipment - Breaking down energy usage from the main fiscal meter will provide a better understanding of what is going on under the surface. Being able to look at energy usage per floor, or being able to attribute a proportion of consumption to the heating system for example, enables you to start monitoring the performance of individual pieces of equipment. One might say that talking about a Building Management System (BMS) as a form of IoT is stretching the definition slightly, but in this context, it is relevant. A BMS monitors and controls core-building services, and has the capability to transmit data via TCP/IP (internet protocol) to third party platforms for investigative analysis. This means a 20% year on year variance due to consumption increasing on Saturdays can now be attributed the ventilation system running according to a wrongly programmed time schedule.

Space Utilisation - Monitoring the movement of people throughout a building is a stand-alone area of building optimisation in itself, but the data points in question can be extremely useful for enhancing energy efficiency. By collecting data directly from occupancy tracking software and room booking systems, or by integrating with third party applications, energy data can be made far more meaningful. Understanding which areas of a building are used most frequently, provides building operators with the opportunity to reduce excessive energy usage during times of low or no occupancy. Is the heating system for the whole building on a set time when different floors run on different start and finish times? Are there rooms that are heated or cooled for the entire day, when only partially occupied?

Environmental Conditions - The importance of measuring environmental conditions such as air quality and humidity has skyrocketed in recent months because of the global pandemic. In terms of energy efficiency, they act as both an input and an output. They can help aid decision making on why an increase might have taken place. For example, an increase in CO2 concentration in a particular space would likely be due to occupancy increasing, which is going to increase the need for cooling. On the other hand, when implementing an energy conservation measure such as reducing a temperature set point or adjusting the ventilation strategy, environmental factors must be considered to avoid a negative impact. Energy managers must consider the building as a single entity, and avoid optimising performance for lower energy costs at the expense of comfort and wellbeing.

Business Operations – This is possibly the most abstract of the four but still very important. Day to day business operations vary from building to building, but with a little creativity can provide a lot of colour to analysis where primary measurements are lacking. For example, a restaurant chain that doesn’t track occupancy, could use its table booking system or the number of transactions through the tills to gain a basic understanding of footfall. This can then be used to normalise energy usage to monitor changes over time. Other examples include ‘number of tickets sold’ for a sports stadium, or ‘number of units shipped’ for a manufacturing plant or warehouse facility.

In the beginning, it is very important to collect as much data as possible. Consider the four points above, and invest time and resources into exploring a variety of channels, as it will be worth it in the end. However, be aware of ending up with too much data. This is a nice problem to have, but you may find yourself in a state of ‘analysis paralysis’. You can avoid this by systematically assessing each variable against your energy data and determining whether it is having any effect on energy usage, and discarding it if it shows no correlation. This isn’t as easy as it sounds, but it must take place to reach a clear outcome. A useful method is to build the picture up incrementally. Start with the most influential factors- these will often be outside air temperature or occupancy, and you may find they explain up to 80% of the variance over the course of a year. From here on, it is a matter of testing other variables to see if they can help justify the remaining fluctuations.

The core message here is to always ask why. Descriptive analysis is far too common in the world of energy management. This includes reporting for the sake of reporting, and simply communicating that building performance has improved or worsened, with no attempt to understand what has caused it to change; or subjective reasoning based on nothing more than assumptions without any empirical data to back up the claims. There is no excuse in the modern world. The data is out there, but it is up to you to go and find it.

If you would like to make a comment, or discuss how Fabriq can help you, let's grab a coffee and begin the conversation.